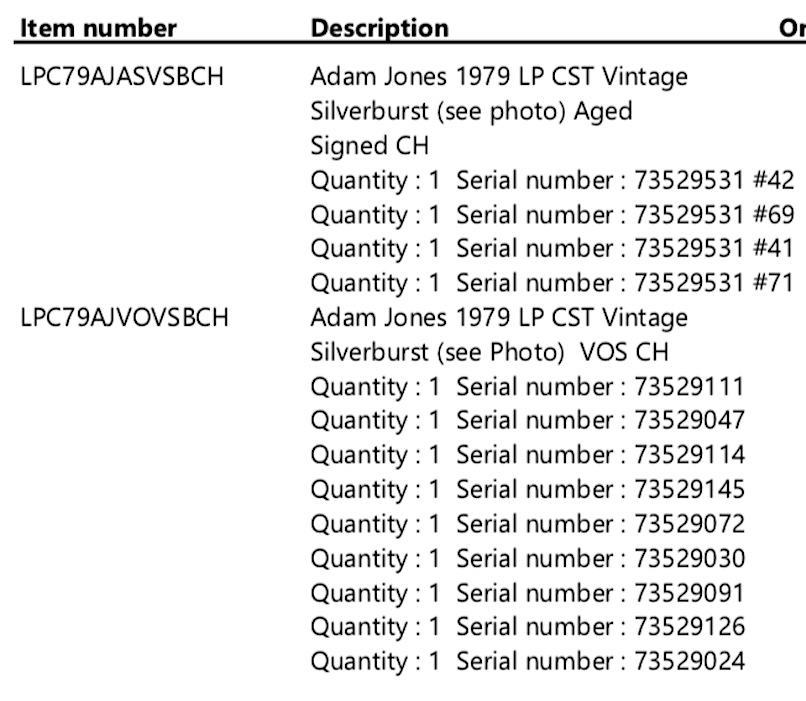 Thirteen of those guitars (including four of the more expensive edition) are now missing after an entire pallet was stolen out of a Sweetwater Music truck at the Flying J Travel Center in Whiteland, Indiana, on October 30th. The signature Les Pauls were on their way to be dispensed to customers who had already purchased the guitars.

“Somehow out of a truck full of guitars, this ONE pallet was singled out and stolen at a truck stop,” said Sweetwater Chief Supply Chain and Merchandising Officer Phil Rich in a press release. “Totaling close to $95,000 in guitars, we feel this person(s) knew exactly what to look for and when.”

Gibson exec Cesar Gueikian added, “These guitars were the dream guitars of 13 Gibson and Adam Jones fans, who had been patiently waiting for them to be delivered. We have decided to publish the serial numbers of the 13 stolen guitars and are appealing to all of Gibson’s fans to keep an eye out for them and let us know if they surface. Our fans should ask any third-party sellers for a serial number before purchasing to be sure they are not being sold one of the stolen guitars.”

As Gueikan mentioned, the serial numbers have been made public (see below). Anyone who has any information regarding the stolen guitars can contact Detective Kenny Polley of the Whiteland Police Department at KPolley@whitelandpd.us or (317) 535-8100.

Along with the guitar’s announcement, Jones released a short film, The Witness, which is soundtracked by a new instrumental song performed by Jones and his Tool bandmates Danny Carey and Justin Chancellor. Since the initial announcement, Gibson has released a new four-minute promotional video for the guitar.

Check out the promo video and the short film below, followed by the list of serial numbers for the stolen guitars. The entire run of Adam Jones’ signature Les Paul guitars is sold out, but there are some available above retail price here.